Cat Tales currently houses multiple species of foxes that some would classify as “misfits”. As you read their stories you will understand more. Often times people see the foxes and consider them “cute and cuddly”. What most don’t realize is that they will bite hard and spray incessantly leaving a foul skunk like odor. They are illegal to own in many locations and/or need fox specialized care, nutrition, and respect.

The red fox makes its home in wooded areas, prairies and farmland. It has a reddish coat that is white underneath and a big bushy tail with a white tip. Red foxes are not all red. Some are brown, some are black and others are silver in color. Even foxes that come from the same litter can be different colors!  Red foxes live in family groups and are known for their cleverness and ability to adapt to different surroundings. They are usually active at night. During the day, they rest in forests, or ravines, curling their long bushy tails around themselves to keep warm. Red foxes have excellent vision, and keen senses of smell and hearing. They can make 28 different types of calls to communicate with each other!

The red fox is a lean hunting machine that’s built for speed. It is slinky and long legged and about the size of a small dog.  The red fox stalks its prey, much like a cat. It gets as close as it can and then pounces on its prey. Its diet includes fruits, berries and grasses. It also eats birds and small mammals like squirrels, rabbits and mice. A large part of the red fox’s diet is made up of crickets, caterpillars, grasshoppers, beetles and crayfish.

Red foxes are not under threat anywhere because of their ability to cope well around humans. They are not considered to be endangered and are the most widespread and abundant wild carnivores in the world.

The arctic fox is an incredibly hardy animal that can survive frigid Arctic temperatures as low as –58°F in the treeless lands where it makes its home. It has furry soles, short ears, and a short muzzle—all-important adaptations to the chilly clime. Arctic foxes live in burrows, and in a blizzard, they may tunnel into the snow to create shelter. Arctic foxes have beautiful white (sometimes blue-gray) coats that function as very effective winter camouflage. The natural hues allow the animal to blend into the tundra’s ubiquitous snow and ice. When the seasons change, the fox’s coat turns as well, adopting a brown or gray appearance that provides cover among the summer tundra’s rocks and plants. These colorings help foxes to effectively hunt rodents, birds, and even fish. But in winter prey can be scarce on the ground. At such times, arctic foxes will follow the region’s premier predator—a polar bear—to eat the leftover scraps from its kills. Foxes will also eat vegetables when they are available. Like a cat’s, this fox’s thick tail aids its balance. But for an arctic fox the tail (or “brush”) is especially useful as warm cover in cold weather. Female arctic foxes give birth each spring to a large litter of up to fourteen pups.

Also called the tree fox, this long-bodies species prefers woodland. It climbs skillfully, leaping up tree trunks and between branches with almost cat-like ability. Active at night, it consumes various insects and small mammals, but may rely more on fruit and seeds in certain seasons. The Northern gray fox has a small, dark-gray neck mane and central back stripe, and a red tinge to the neck, flanks and legs, with a buff or white chin and belly. The speckled or grizzled coat is due to individual hairs banded in white, gray, and black. Long, bushy tail with a black dorsal stripe and tip. Gray foxes can run up to 45 miles per hour.

Inhabits temperate and tropical forests, woodland, brush, semi-arid scrubland, agricultural habitats and peri-urban areas. Avoids very open areas such as grassland and prairie. Its den may be in an old burrow or log, but more often in a tree hole up to 30 feet (9 m) above ground, or on a building ledge or in a roof space. Most gray foxes live as breeding pairs.

Mating occurs January-April with a gestation of 60-63 days. The average litter size for the Northern gray fox is 4 (ranging from 1-10). Each new-born cub is black-furred and, like most foxes at birth, helpless with eyes closed. Its eyes open at 9-12 days and by 4 weeks ventures from the den and begins to climb, guarded by the parent. It starts to take solid food 2 weeks later. Todd​ and Trixie are siblings. Part of our smaller canine family they continue to educate us about the dynamics of male and female foxes. They live together (Todd is neutered) and spend most of their time digging holes, climbing on their furniture to watch everyone and everything, or having tiny play fights against one another.  Squabbling can get noisy at feeding time, but it is just Trixie reminding Todd that it is Ladies First. You can tell them apart by their markings — Trixie has a very dark face, tail, and legs while almost all of Todd’s body is the classic fox color of reddish orange.​ Born on April 6, 2019. 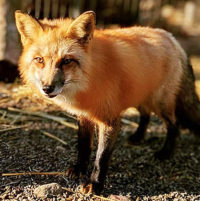 Kali, short for Kalispell, came to Cat Tales as a young kit in the spring of 2018. She arrived with several other animals, two of which were coyote pups around the same age. But despite her seemingly compatible pup friends, after a brief introduction, it was clear that Kali would like to live alone, as is typical of a red fox. Kali grew very quickly and though you would never know it, she is missing a toe on her right front foot. Kali is extremely energetic and loves to have space to climb and throw her toys around. Foxes are known to constantly dig holes and hide food and other treasures. When the time is right, they will dig it up or scent mark it for later discovery. Just one of the ever-fascinating fox behaviors to see! Born March 30, 2018. Jasper and Jinx are our two young silver foxes, a melanistic variation of the red fox that displays wild pelt variations from pure black to blue-grey, or silver spotted.  These two came to Cat Tales in early June 2019.  Beyond learning to be good brothers to one another, they have also become fond of their neighboring fox kits Trixie and Todd.  But most of all they enjoy being together no matter the weather, time, or event. Jinx is almost purely silver, a shining fox who spends most of his day curled up napping or ‘gekkering’ (a sharp, barking sound) at nothing in particular.  (Jinx also has a genetic deformity in his front legs, though it does not affect his behavior.) His brother, Jasper, is more curious about the world and will watch staff and guests alike.  He is also not as silver as his brother, with quite a few patches of black across his fur. Born April 15, 2019. Buddy and Jovie came to live at Cat Tales in March of 2020. They are Arctic Foxes and when they first arrived, they had their full white winter coats. During the summer they shed their white fur and are a dark brown grey. They are the smallest of the fox species and when not curled up sleeping, they are very active in their new fox designed exhibit. Though it is hard to tell, both foxes have special qualities. Buddy is a bit hard of hearing and Jovie is cross-eyed in both eyes. We are learning more and more about their behavior every day, watching the similarities to the red foxes and the behaviors that make them arctic unique. Born June 2019. Roxy arrived in April 2021 with other animals in need of a retirement home that could provide them with quality of life in their final years. We are learning a lot about the species of Gray Fox and how their behaviors differ from the others. Being an older animal we are keeping a close eye on her comfort and quality of life, providing for her geriatric needs. Born 2011