Servals and their domestic hybrid cousins, the Savannah Cat, are still commonly owned in the United States. As kittens they are similar to domestic cats in size and behavior, but as they mature the wild and highly active nature develops. These cats can leap straight up to most household ceilings putting items at all levels accessible. They naturally stun and kill their prey by violently striking and stunning it with their front paws. Servals do not like to be cuddled and have razor sharp teeth. Their exceptional hearing leads them to startle and spook at loud or unexpected noises. Currently Servals and hybrid domestic cats like Savannah Cats are one of the most requested rehome / rescue cats once they have outgrown “cute” and reach maturity.

Servals are usually solitary but also in pairs. Usually nocturnal, but also active in early morning and late afternoon. Prey is located by sight or hearing (large ears to locate burrowing rodents underground and dig them up) and caught with a slap of one forepaw, or a high arching pounce. Playing with prey seems to be common. Servals regularly wade in shallow water in pursuit of prey. When foraging tend to follow regularly used pathways and roads.

The cat pounce – having located prey, usually at dusk, and mainly by hearing, the serval excels at the cat pounce. It leaps up to 13 feet (4 m) horizontally and more than 31/4 feet (1 m) high, to strike the victim with its forepaws. This cat eats rats and similar sized rodents, birds, fish, and large insects such as locusts. Frogs are a favorite of wetland-dwelling servals.

The average litter of 2 young is born after 68-79 days’ gestation. Young are born in burrows dug by other species, among long dense grass, or under bushes. They disperse at about 1 year. 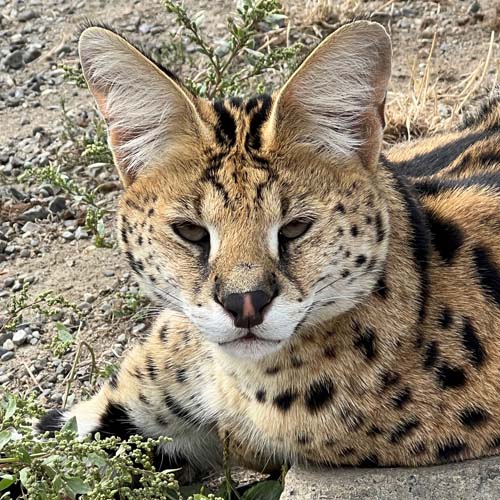 Ozzy, a young African Serval, arrived in December 2020 and has already won the hearts of our crew. Ozzy’s family loves him very much, but due to regulations regarding ownership of Serval cats they knew it was better to place him with us than to risk having him taken and euthanized due to restrictions on owning a Serval. We appreciate their putting Ozzy’s future and best interests ahead of their love of having him with their family and entrusting him to Cat Tales for his forever home. We wish to thank them also for their generous donation to our year end fundraiser, which helped to fund setting Ozzy up in his new forever home. Born April 7, 2019 Ginger is a young female Serval who came to Cat Tales when her former owner could no longer keep her. She was moving to an area where ownership of exotic cats is illegal. Ginger was released to us for care with Ozzy. Ginger and Ozzy are not compatible as Ozzy attempted to kill Ginger when she was a kitten and they both remember the trauma. Along with injuries sustained in the attack, Ginger was very sick upon arrival and required months of intensive care to maintain quality health. Ginger has grown into a beautiful, typically hissy Serval. Her pink nose indicates she may have domestic cat in her genetics. Born May 23, 2020.