Siberian Tigers (or combos with Bengal Tigers) are still bred in the United States and sold as “pets”. Cute and cuddly as cubs they grow very quickly and are extremely dangerous as adults. Tigers have 5 times the strength pound-for-pound as a trained human athlete. This makes a 500 pound tiger a predator with 2500 pounds of muscle strength, 3-4 inch canines and 18 razor sharp claws. Just a “friendly nudge” from this large animal is like being hit by a small car. Once knocked to the ground – your prey! Large zoos are considering phasing out Siberian Tigers in their collections due to the lack of space for their size that could be utilized for smaller species of tigers or other animals. 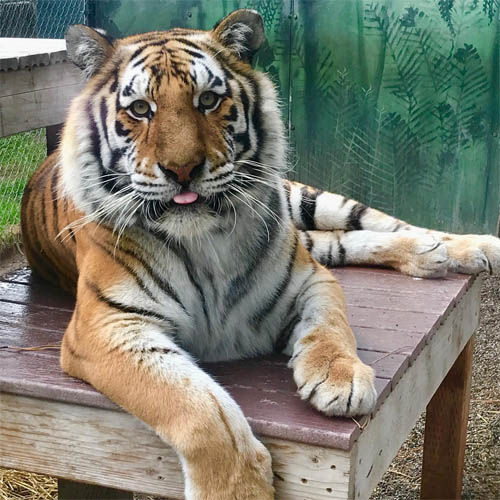 Born in a litter 0f 3, her two siblings are at Tiger Island in Vallejo. Being a singleton cub, we knew it would be best if she was raised with a buddy. Not having any other tigers that were her age, we contacted the local humane society to see if they had a compatible large breed puppy or dog. They had just taken in a Great Pyrenees pup that was a few months older than Amura. We did a cub-pup meet and greet and it was a perfect match. Sage provided Amura with play, companionship, and bonding.  This education into interaction with the animal world proved invaluable for them both, even when they were eventually separated due to their cub and puppy relationship being outgrown.  Sage began work as a security dog for us, and Amura matured beautifully.  Born April 13, 2010 Koshka was born in November 24, 2007 as one of a litter of four.  He and his siblings (Malenky, Sestra, and Tuga) were given Russian names – but while doing research, we came across the word Koshka which translates into ‘cat’ or ‘kitten.’ Despite being 650 pounds, he definitely likes to act like a kitten, making him live up to the perfect name.  In fact one of his favorite activities is the Big Cat Adventure, where he gets hand fed by guests and gets to show off a bit for them.

He loves water in the summer and snow in the winter.  Especially when we build him snowmen that he can knock down and play with.  Though most guests come out during the summer, winter is the prime time to see these animals at their best – playing and going wild in the weather that they were instinctively born to love. Sestra is a Russian name meaning sister. She is the smallest of our Siberian Tigers weighing about 300 pounds. She is the littermate to Tuga and Koshka, and an older sibling of Amura. The Siberians were the last animals born at Cat Tales almost 15 years ago. At that time Cat Tales Wildlife Academy (aka Zoological Training Center) was concentrating the Zookeeper studies on endangered species reproduction and subsequent neonatal care/health observation. After months of discussion with our veterinarian, the decision was made to breed our only compatible nonrelated pair, Sampson, and Delilah. Prior to the birth of the cubs, we made arrangements for zoo placement of at least 2 when they became of age. Complications with the transfer arose and all cubs remained at Cat Tales. Born November 24, 2007 Tuga is a Russian name meaning Fast with difficulty. He is the largest of our Siberian Tigers weighing between 700-750 pounds. He is the littermate to Sestra, and Koshka, and an older sibling of Amura.

When first born, Siberian Tigers are the size of guinea pigs and reach full size at ~3 years of age. We are often asked how we come up with names for the animals, in the case of this litter we wanted Russian names since they are Siberian/Amur tigers. Tuga seemed to be a name that kids could say easily, but how “Fast with difficulty” would play out we didn’t know. This was until at 18 months of age while rough housing with his brother Koshka and trying to jump onto his den box, his femur (leg) would snap on the edge of the den under the weight of his 250 pound sibling. Eight weeks of 24/7 observation/supervision, 3 casts because he was a growing tiger, and 5 rolls of duct tape used to repair the tiger bites in the cast later, we knew exactly why he was named Tuga – Fast with difficulty. Born November 24, 2007